Aristotle's logic is a panel with hands-on activity at Patras Science Center.

This exhibit introduces the basic principles of logical and mathematical thinking. The module consists of two cubes made of plexiglass, containing enclosed a piece of paper on each face.

On the first cube, there is one statement on each of the six faces. Four of these sentences make reference to the others, and the task is to decide which of these propositions are true and which false. The other two sentences have a gap, that must be filled in to make that proposition true.

On the second cube, there are various independent syllogisms and enigmas and the task is to reach a conclusion on each one. Next to the cubes, there are additional instructions to motivate the puzzle. 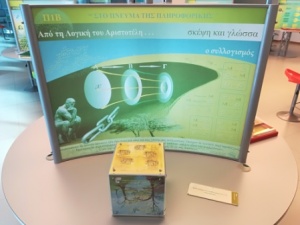 The cubes are designed to be used by visitors of any age from 6-7 years old. For the younger ones, the best activity is to fill in the missing part of the propositions of the first cube, and try to reach a conclusion of a simple enigma or a simple syllogism on the second one.

The older ones (14 years and up) can deal with all six faces of the cube, and can also explain why the conclusion reached in some simple syllogisms appears to be bizarre. For a more advanced activity, the participant is asked to use symbols in order to code the syllogism and reach a conclusion faster. This is achieved on workshops of 1.5h offered at Patras Science Center.

Two or more logical propositions can be related through conjunction and disjunction. These two logical operations are core elements of set theory identified as intersection and union respectively.

The related poster refers to the “square of opposition” where affirmation, negation, universal and particular can lead to all kinds of logical propositions. The difference between contradiction and contrariety can be easily understood: two contradictory propositions have both the same universal subject but different predicates (one affirmative, one negative) and two contrary propositions differ both in the subject (one universal, one particular) and the predicate (one affirmative, one negative).

The second cube introduces the notion of syllogism and the conditions (validity and soundness) under which a syllogism becomes proof.

In Patras Science Center, this module is part of the exhibition on mathematics and informatics. The module is surrounded by information posters on greek philosophers, the foundations of mathematics in logic, and references to formal logic.

As far as we know, there are no similar exhibits in museums we have already visited.