A spiral slide on display at the front yard of the Tekniska museum.

A slide of steel in the shape of a nautilus shell is the central piece in Tekniska’s Mathematical Garden. This is true figuratively (it attracts attention); and literally, since the garden has the shape of a giant spiral and the slide is in the center.

The slide has a instruction sign and there is also information in different levels about the mathematical aspects of the Nautilus shell and the connections to both Fibonacci and the golden ratio and spiral.

The purpose is to experience math with your body and to encourage curiosity for math. And visitors love it!

The nautilus shell is one of the classics for describing connections between math, art, and nature. It is often said to be connected to Fibonacci and the golden ratio, although there are some misconceptions.

There are many types of spirals, often confused:

On the spirals made of arcs of circles, the curve is continuous, but its growth is not: on each quarter of a circle the radius is constant, it does not grow, and suddenly at each joint between an arc and another the radius (and thus, the curvature) changes by a step.

Actual nautiluses do not follow a circle-piecewise spiral, because they grow continuously. Real nautiluses (and snails, and other shell animals) follow a logarithmic spiral and have many different growth rates (different values of k). It is, in principle, possible to find in nature (or to imagine) a nautilus with a value of k close to that of a golden spiral. Since the golden spiral can be well approximated by a Fibonacci spiral or by a Golden rectangle spiral, one can say that those curves look like a nautilus.

See a more detailed explanation of the different spirals in Wikipedia [1]. See also [2].

The idea of making such a slide was a result of a workshop with artists, mathematicians, teachers, and architects. The slide is completely custom-made. 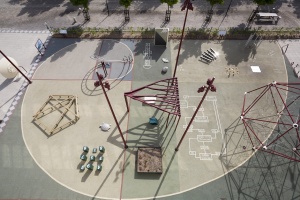