The Wall of Fire is an exhibit at MoMath. A portable version of this exhibit is called Ring of Fire. 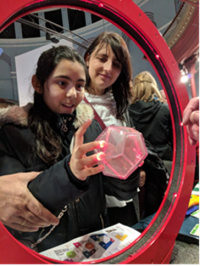 The Ring of Fire.

The exhibit consists of a laser device that projects a plane (a wall) of light. The visitor has some translucent objects (cube, cone, cylinder, tetrahedron, and dodecahedron) that he or she can insert into the plane of light to reveal a cross-section of the body.

Highlight the sometimes-surprising cross-sections of different objects by using a plane of laser light to cut through their surfaces.

The exploration of cross sections of regular solids can reveal geometric properties such as symmetry, dihedral angles, and the relation of polygons to polyhedra. The cone is essential for exploring the conic sections.

This smaller version, Ring of Fire, was part of the Math Midway exhibition by MoMath. Several replicas sold by MoMath are on display in other museums (e.g., ix quadrat, MathsWorldUK, MMACA, the Science Centre of Singapore). Two copies are also traveling in Brazil.